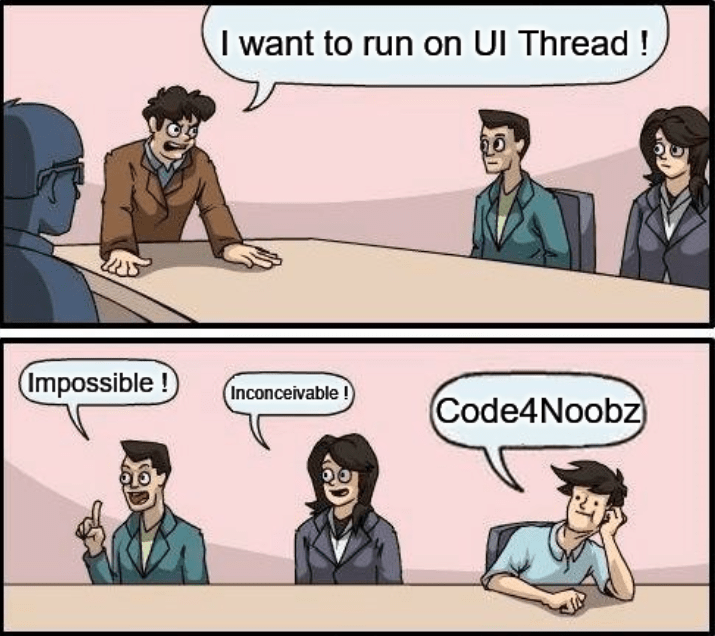 What is “multiple view” in UWP?

In UWP, your “main” application can open a new – separated – view.

When should you use multiple views?

In many cases it is useful to be able to open multiple views:

How to run on the UI Thread?

If you have only one view you can use the following code to return to the UI Thread and execute some code.

I prefer to use the extension method from the UWP toolkit.

The reason why is explained here. The RunAsync schedules the work on the UI thread and returns control to the caller immediately. Here is an example of wrong utilisation.

How to run on UI Thread when I create a new View?

When you play with multiple Views you can’t use the previous code because you working with multiple UI Thread. You ignore on which one you one to go back. The exception you will get, if you are on the wrong thread will be something like this “The application called an interface that was marshalled for a different thread”.

I found nothing about this problem on Google. So , I implemented my own AwaitableRunAsync supporting MuliView. May be it is not the best way to do, but it’s working very well on a big UWP Project.

Firstly, you need class where you keep the “thread identifier”. We will use the windowId of the View.

This is how to get the window Id of the current view and instantiate the DispatcherManager. (ApplicationView)

There is only two method in the DispatcherManager class. It allow you to choose between Func<Task> and Action..

As you can see It iterate all the views via CoreApplication.Views Secondly, You must go back the UI Thread of the iterated view. You can do that via the await iteratingview.Dispatcher.AwaitableRunAsync. Finally, you are able to invoke you function or action on the UI Thread.

WPF – MessageBox on top of the other Views